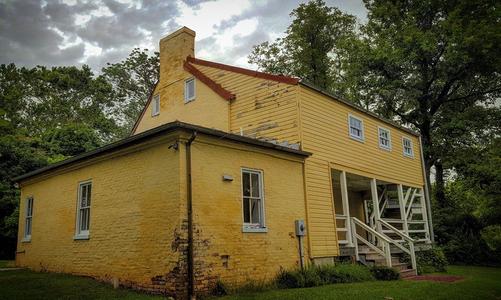 Building Uses: The building was originally constructed as Armory Building #23 as part of the United States Armory and Arsenal of Harpers Ferry which was created to mass produce arms for the military. The only known use of this building at this time was as an armorer's residence. During the Civil War the building and the surrounding area served as an encampment for Union and Confederate soldiers however it is most famously noted as a popular backdrop when Mathew Brady Studios photographed the 22nd Elite NY State Militia. There is further documentation that the building was used as a provost marshals jail during the war.  Following the Civil War the Armory and Arsenal was disbanded due to the destruction of the manufacturing facility. In 1865 the Virginia IOOF Lodge #1 petitioned the US Government to purchase their building because their original facility was severely damaged during the war. In 1869 the US Government approved their petition and sold the building to the Lodge for $150.00. Virginia IOOF Lodge #1 has owned and maintained the building since 1869. During their ownership they have rented the lower part of the building for residential purposes, however in 1992 the building was renovated and has been exclusively used by the Odd Fellows ever since.

Building Exterior: Federal I house. It is a frame and brick construction with a slate roof and rubblestone foundation. The windows on the all are historically in keeping with the age of the building. On the rear of the building there is a wooden porch with stairs that lead to the 2nd floor. There is also an original set of steps leading from the porch to the 2nd floor anteroom which are both enclosed by paneled doors. The 2nd story anteroom as seen in historical photographs was originally a porch but is now enclosed.

Building Interior: The building has 6 rooms with a full unfinished basement. The upstairs meeting room has a wood paneled barrel ceiling that was added in the early 1900s. There have been minimal remodels in the upstairs. The anteroom is basic paneling and the original brick exterior of the building. The first floor has a modern bathroom, updated kitchen and a large meeting room which has the original front door entrance. The building improvements also include central heat.

BASEMENT:
*Soldier seen in the basement of the lodge by the stone stairs. Seemed to be standing at attention and starting at Phil Folk.

FIRST FLOOR:
*Soldier was seen outside of the window in the kitchen area next to the doorway to the outside. No other details presented regarding this apparition.
*Hear sounds above the kitchen area. Possibly on the roof?
*Shadow figure seen by window near doorway to outside.
*Footsteps heard in the carpeted rooms (middle and back meeting room).
*Footsteps heard above the 1st floor in the 2nd floor meeting room.

SECOND FLOOR:
*A decorative wood scrollwork fell down in a strange position.
*Picture that had hung in the room for years fell after the members discussed us investigating the lodge.
*Door to the anteroom opens.
*The chain on the metal wardrobe was found to be unlocked when it had been locked. (happened several times)

BASEMENT:
*Sounds in corners of the room. (Possibly mice. There are strong indicators of this.)
*Shadow figures near the stone steps.
*Equipment manipulation. (Spirit Box, Ghost Box, Flashlight, K-II)
*Light appeared and disappeared from the top of the steps to the kitchen
*Footsteps can be heard above on 1st floor

FIRST FLOOR:
*Footsteps in kitchen and in back meeting area
*Basket in the kitchen fell off the table
*Metal pans from the top of the refrigerator fell on the floor

SECOND FLOOR:
*Footsteps in meeting room and in anteroom
*disembodied voices and sighs
*cold chills
*heavy feelings
*objects moved (wobble lights, balls)
*shadow figure that pulses at the doorway to the anteroom
*footsteps, shuffling, and pacing heard in corner opposite of the anteroom door
*a little girl approximately 9 years old has been seen in the meeting room and anteroom
*a man by the name of Calvin Howell has been connected to by mediums
*a man by the name of John who was a member of the Odd Fellows has been connected with
*a young boy has been seen possibly imprisoned at the lodge
*equipment manipulation/ data (K-II, flashlight, spirit box, ghost box, SLS camera)

LITTLE GIRL (Meeting Room, Anteroom, Attic)
*young wearing lavender or gray dress with ruffles and puffy sleeves
*clean long big curls hair, twin braids and dirty wavy hair in her face (She has been seen in varying states)
*possibly kidnapped at a young age and held captive
*Not willing to talk to men
*She will hide when Calvin or other men are in the area that she can sense/see
*Does not verbalize
*connects with psychics/ mediums
*uses flashlight and K-II for communication
*likes the door to the anteroom open but only about 6-12 inches
*walks around in the anteroom
*WE HAVE NOT GOTTEN A NAME
*EVP- captured her saying “Knock, Knock or possibly Grand-Ma; Daddy; humming; singing) ATTIC ONLY

CALVIN HOWELL (Meeting room only)
*Does not communicate via equipment
*very large man lumberjack kind of vibe; jeans, long sleeve button shirt, suspenders, dark hair, pock marked face
*angry
*does not like when you mention him possibly being homosexual
*drinker likes whiskey but not Jack Daniels
*does not like assertive women
*Paces in corner opposite of the door to anteroom that is “his corner”
*No EVPs or equipment data

SOLDIER
*wearing blue uniform
*smooth pale face
*dark clean mustache
*stares straight ahead with very blue eyes
*more of a residual haunt, does not communicate
*other spirits do not seem to know he is there

YOUNG BOY
*only connected to via mediums
*seems like he may have been imprisoned in the lodge
*visions conclude that he escaped and was shot in the back on the lawn by the lodge steps (back veranda)
*13-16 years old; longer blonde hair; wearing brown pants, tan shirt, and black suspenders

BASEMENT
*Noted to be cooler even in the summer months with distinct drafts from the 1st floor to the cellar stair exit.

FIRST FLOOR
*No drafts or breezes noted on this level.

SECOND FLOOR
*Noted to be warmer than the other levels with a strong draft from the entrance to the newer stairs that flows to the anteroom.

Concluded Information as of 2/2018: It seems that the activity is most prevalent between April to October. We do know that the soldiers that were stationed in this area were present May to September which we received an affirmative response to in the basement. We need to conclude whether the conditions or the variables in the location are more favorable in those times as well. The young girl does seem to spend her time mostly in the attic area. We captured her humming at various points for the time that the recorder was working in that area. In many cases paranormal theory says that this location follows a residual haunt guideline however many of these spirits are intelligent. It makes us question more and more whether the conditions, timeline or variable has more influence on the 'haunt' than anything else. We will continue to return to this location to determine if we can find out more conclusive data.