The A.P.S. Crew did many investigations and ghost hunts at the Masonic Temple. We were able to utilize the location as an ongoing investigation location and we enjoyed inviting other teams to work along side of us to increase the diversity of techniques. Here is a list of known experiences that were had by members of the team and others:

*Investigator became violently sick on stomach and was unable to walk by herself out of the Armory in the front section of the building. She went back to that area in more recent years and had a similar reaction.

*Contacted Albert Davis utilizing K2 Meter and Flashlight. He was very blunt and didn't like certain subjects. The Masons were amazed that we were able to deduce his personality from our sessions. (Job's Daughters room, Purple Lodge, and Auditorium.)

*Two investigators saw a strange sparkling light anomaly in the back right of the Purple Lodge. During the session we contacted a female who called herself "Alice" who claimed to have manifested this light anomaly. She claimed that she was an angel.

*A floral smell was noted on the staircase leading to the 3rd floor.

*During a collaborative investigation with Portal Paranormal Society, three investigators were asking for a spirit to knock. They received three knocks and the anteroom door opened fully by itself. They were not able to recreate this experience.

*Footsteps and shadows are frequently noted during investigations near the anteroom door into the Purple Lodge.

*Discussions of religion and sexual information was frequently a trigger for responses on the Spirit Box and Flashlights.

*Several incidents of items being thrown occurred in the purple lodge. Coins and nails were heard hitting things and found on the floor. The origination of these items was unknown.

*During a ghost hunt several people were able to get a ball to move across the floor of the Blue Lodge.

*Contacted A.K. McGraw who was a member at the Lodge and at Engine One across the street.

*During our first investigation we were able to contact a young girl int he game room now bar area.

*Albert Davis was seen in the Auditorium from the Projection booth off of the Gameroom/ Bar Area.

*In the hallway leading to the offices/ coaching rooms there was a small table with Job's Daughters information years ago. During our first investigation two investigators found a starburst balloon weight had been moved from the table to the floor. Two different occasions they picked it up and placed it back on the table.

*Apparition was spotted on the steps leading to the 2nd floor.

*Tall Shadow figure was frequently seen in the back hallway near the bathrooms.

*During many investigations we received responses from a gentleman (I use that term loosely) that liked to hang out in the Women's bathroom on the basement level. Two psychics were able to connect to this gentleman.

*Flashlight sessions and Spirit Box sessions frequently received responses from young females in the back hallway.

*Black shadow was seen moving from the back hallway towards the Smallatorium. It went right in front of the investigator standing in the hallway. Enough to make her back up.

*Two investigators were walking in the back hallway towards the Smallatorium and both encountered a large wormlike mist that was coming towards them. When they noted each other moving out of the way, they exclaimed "Did you see that?"

*Footsteps were noted on the staircases leading to the basement from the 1st floor.

*Woman in white was noted on the staircase leading from the 1st floor to the Smallatorium. She was seen by 3 investigators.

*Strange light anomalies were captured in the windows of the Auditorium doors. We were unable to recreate this anomaly. See videos below.

*Two investigators on two different occasions were pushed on or near the stair case from the 1st floor to the smallatorium.

*The Auditorium was one of the areas that the Masons had the most experiences in. Footsteps could be heard on the stage and in the dressing room above the kitchen. The full bodied apparition of  Albert Davis was seen in this area.

*Strange light anomalies have been noted several times in the auditorium.

*A malevolent male entity was contacted on many occasions in the dressing room. He did not like men, he was a bit perverted, and he likened himself to the devil. He however slipped up occasionally and answered questions that left us in no doubt that he in fact was a man at some point in time. He associated himself with the name Larry. His energy could make people sick and he left the area occasionally to irritate us in other parts of the building. (Sub Basement and Lodges)

*A young woman is said to be in the bathroom area of the dressing room. She was very sad. She never communicated.

*Shadow figures were frequently seen in the doorway from Larry's room (back room in dressing room) and the middle room.

*Doors in this area have been slammed when people were in there.

*While doing baselines in the dressing room another investigator noted that the 24 hour safety light by the elevator to the parking garage was on fire. We had to stop the investigation to address the issue.

*The furnace blew up the week before our initial investigation of the location. One of the spirits said that it was a "warning" to behave in his building.

*The elevator shut down on the 1st floor and wouldn't work again the day of our investigation.

*During initial baselines a warm spot was noted in the corner of the hallway around the bathrooms (near mens). The temperature on average was 60 degrees and it climbed to 76 degrees in this concentrated area. The EMF which had been around .6 initially had climbed to 9.1 milligauss. We were unable to determine a point of origin.

*During a ghost hunt the door at the top of the side steps opened several times even though one of the Masons with that team made sure the door was latched firmly.

*People frequently had strange feelings in the basement. Sick to stomach, uneasy, frustrated.

*Like in the basement during initial baselines a very warm spot was noted by the radiator in the upper part of the wall in the freezer room. The temperature increase was from an average temperature in the room of 61 degrees to 72 degrees in this concentrated area.  There was no point of origin, it was noted in a 1 foot area like a sphere. The EMF which had been around .3 initially began to fluctuate between 4.0 to 8.4 milligauss. This lasted for 3 minutes until it dissipated and returned to around the average EMF and Temp. This occurred in several spots leading from the freezer room into the bathroom area.​​

Friendship Lodge No. 84 A.F. & A.M. out of Hagerstown, Maryland was chartered on May 22, 1827. In 1897 they purchased a parcel of land with intent to build. The first cornerstone was laid on the vacant lot April 21, 1898 and on March 8, 1899, only eleven months later, it was dedicated. The Masonic Temple is located at 54 South Potomac Street, Hagerstown, Maryland and has served as a permanent home for the Masons to present day.
The lodge was built on a 0.23 acre lot in Historic Downtown. The original three story building which also has a basement, was designed by J.H. Hunter. Construction was executed by Thomas Carnes, a local contractor. Stonework was carved by J.R. Jackson, also a local of Hagerstown. Solidity and strength of this structure is apparent in this well preserved example of late nineteenth century Romanesque influenced commercial architecture. The stone facade is decorated with foliated scupture and Masonic emblems. The front of the building is divided into three arcades on the upper levels and has a heavy arched entrance way with flanking fluted columns. The ground floor originally contained a shop front to the north of the entrance way. It originally house the post office and later was rented out. Unfortunately, the tenants left the shop trashed and the Masons elected to have it remodeled. The old entrance and windows to the shop were replaced with two large windows and the shop was converted to a lounge area for use by the Freemasons. It is remarkable that even with the remodel the facade looks untouched because the stones match up perfectly! Another renovation occurred in 1939 when there was an addition to the original building, an auditorium where they held fancy dinners and debutante balls. The auditorium along with the rest of the building is still in use today and remains home to Friendship Lodge No. 84.
Other organizations/ chapters also make use of the temple for their meetings such as the Knights Templar, Order of the Eastern Star, and Jobs Daughters all of which are branches off of the Freemasons. 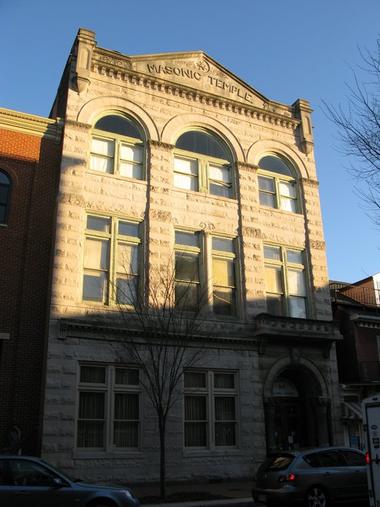