It is hard to give an adequate summary of our experience at the West Virginia Penitentiary because not only was it our first ever foray into this amazing field of study, the location was our first experience with a really packed event. We arrived at the location early enough to take pictures and wander the front of the facility. Once inside we signed in and were given information regarding how the night would go. We were fed pizza and waited with over 50 others for the night to begin. Once the tour was out of the way we were given free reign of the location for the night. Anyone that had been to WVP before knew the hot spots and congregated in them. The Sugar Shack, the area where R.D. Walls was killed, and Maximum Security. We trekked over the location to find spots that no one else seemed to care about but we were not successful in getting responses on our equipment. We met up with a team out of Michigan called Eidolon Paranormal, who were gracious enough to include us in their sessions. We had an excellent session in the Maximum Security area which we heard footsteps and were able to get really great EVP responses (See Below). The infirmary area was not busy and we spent a few hours there heard an alarmingly loud bang that made us check our pants. We also were able to capture another EVP when we jokingly asked why the inmate had rubbed his genitalia on the floor. While the location was excellent and in good condition, the event itself was overcrowded and not enjoyable. It was a win because we did actually get some clean EVPs.

​The concept type of the penitentiary is called the "silent system" which dates to 1818, with cell blocks with the cells back to back, enclosed within a large building and several tiers. Often made of steel, the cell blocks were large, airy, and sanitary, here inmates were able to work together during the day and were separated at night. Over the course of years 104 executions took place at the State Penitentiary. Death by hanging was used between 1899 and 1949, with the early hangings possibly taking place in the North Wagon Gate. A 1929 publication states that the Main Hospital Building was the location of the death cells (death row) and execution room. The State Legislature in 1949, decided electrocution was more humane. This method was used until 1965, when the legislature abolished the death penalty. At that time executions took place in a building called the Death House where there were four holding cells on the first floor. Although the penitentiary saw many additions and expansions through it's history, it eventually closed because of overcrowding. The West Virginia Supreme Court ruled it cruel and unusual punishment to allow 5 men to each cell. West Virginia Penitentiary is most known for it's 1979 prison break of 15 inmates and the 1986 riot. The prison is still used today for historical tours, paranormal events, and training exercises for law enforcement.​

Our second foray into the West Virginia Penitentiary was worse than the first. There is something to be said about enjoying a dark night in an old jail however again we can note that this location was overcrowded. As of this time we had been a time for a few years with members that were well on their way in becoming excellent investigators. Public ghost hunts for us were an informal fun time to meet new people within the paranormal community. Fortunately for us that was about all we got out of our second trip to WVP. The location had many young and amateur investigators that did not really seem interested in the investigation. We were able to hit a lot of the hot spots from time to time with few others in those areas; the sugar shack, maximum security, the infirmary, and a few other spots that were "evolving" into more active areas. It's an interesting thing to note that there were spots that weren't active before which was supported by those who worked the location, however over time they became active. We did not capture any EVPs, we had no real equipment communication, and we did not have any paranormal experiences of note.

​The West Virginia State Penitentiary in Moundsville, was the state's first penal institution, serving for 129 years until it closed in 1995. The period of significance for the penitentiary is from 1866 to 1939. ​Built of sandstone in the Gothic Revival style which was popular in the mid to late 1800s, the architecture boasts buttresses for large windows to allow maximum sunlight during the day, symmetrical twin towers and battlements. The crenellation that surrounds the roof edge gives the appearance of a fortress. 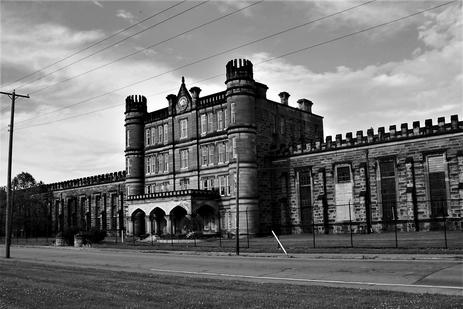